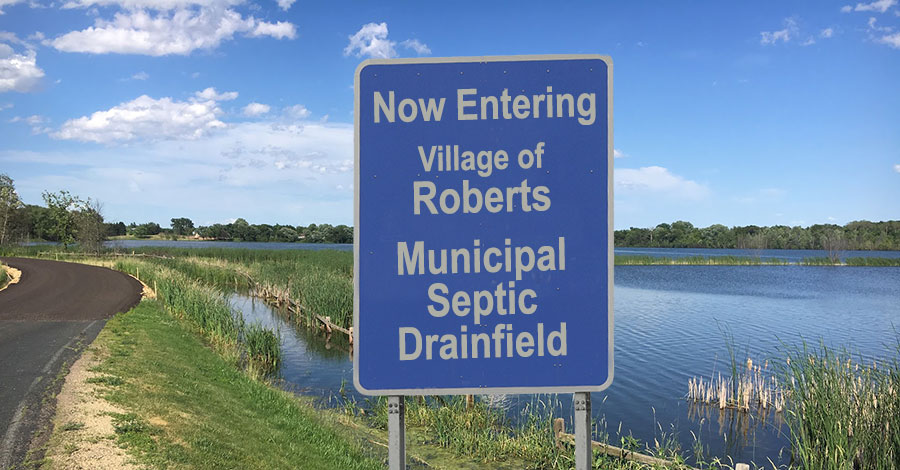 The Wastewater Treatment Plant (WWTP) operated by the Village of Roberts in St. Croix County WI is on a path toward implementing a groundbreaking new technology as a part of its treatment process by the end of 2019.  The system, designed by startup company, CLEARAS Water Recovery, in Missoula, MT, has the ability to remove phosphorus from municipal wastewater down to a level that is virtually undetectable by current measuring equipment.  This is great news for the WI State Dept. of Natural Resources, who sees phosphorus as one of the main contributors to poor water quality in lakes and rivers all across the state.

The Roberts WWTP discharges wastewater into Twin Lakes, which are located in the Town of Warren. Twin Lakes is comprised of East Twin Lake, and West Twin Lake, which are separated by a narrow road, and are linked together through a culvert under the road. The treatment plant has been operating since 1962, and has gone through several upgrades over its lifespan.   It presently discharges approximately 100,000 gallons per day of waste effluent into the lakes, and has a design capacity to discharge 465,000 gallons per day.  The volume of wastewater has increased over the years along with the growth of the Village of Roberts.

West Twin was once known as an excellent fishing lake, and East Twin has historically been marshy wetland.  Today, these lakes are listed as impaired by the DNR, and are a generally hostile environment for fish other than carp and goldfish, which are extremely prolific in the lakes.  They are among the most polluted lakes in the DNR inventory.  The DNR has responded over the years with an ever-tightening level of allowable pollution limits, including phosphorus, which the Village must meet under the terms of its discharge permit.

The Roberts WWTP operates under some of the tightest restrictions of any treatment plant in the state, and the restrictions are getting much tighter by the end of 2019.  Under the terms of its DNR permit, the WWTP will have to reduce phosphorus levels to near zero… a level only achievable through the implementation of CLEARAS, which is the only viable option the DNR has approved for compliance by the Village.  Essentially, the DNR has given the Village no choice but to implement CLEARAS by 2019.

The DNR is extremely eager for the Village to implement CLEARAS because the process has the potential to solve phosphorus problems in more than 600 other water treatment plants all across the State.  Roberts will have the first install in the State, and the DNR wants it to happen on schedule, regardless of what it means for the residents of the Village of Roberts, and the Town of Warren.  While reducing phosphorus discharge to near zero is a worthy goal, and would make the Village of Roberts the leader in the State, and would set an example for other plants to follow, there are some serious issues with the current plan that are being completely and willfully ignored by the DNR and the Village.

One issue is the cost to residents of the Village of Roberts.  The price tag associated with implementing CLEARAS will be more than two million dollars.  That’s a big number for a community of just over 1600 residents to absorb.  There will undoubtedly be a major utility rate hike to help cover the costs.  Village residents have seen one increase beginning in January of 2018, and there will be more.  According to Willard Moeri, President of the Board of Trustees, the strategy of the Village is to gradually increase rates rather than a single rate hike.  At the January Village Board meeting, he stated: “We thought it was better to gradually increase it, than sit like other communities have, and spike it up five times of what the small increases are… just so you could adjust to that, because we know it’s coming, and it’ll be coming within 2019”.  The rate increase discussed at a recent public works meeting was estimated to be about $10 per month or $30/quarter for an average residential customer.  Any amounts not covered by utility rate increases will need to come out of the General Fund, which is paid by all property owners regardless of their utility usage.

A larger issue, which affects the Town of Warren, in which Twin Lakes is located, is the continued rising lake levels, which can be attributed to the wastewater effluent from the Village.

Twin Lakes has been on a slow rising trend for more than 40 years as a result of the cumulative effects of the Roberts WWTP wastewater discharge.  The lakes do have wide natural level variations that follow annual precipitation. These natural swings have largely masked the slow, average of 4.8” per year level increase from the wastewater augmentation documented by the DNR as early as 1995.

With the above average rainfall the area has experienced over the last three years, the lakes finally hit a damaging flood stage that has submerged roads, destroyed one lake home entirely, severely damaged others, and has adversely affected many others as the lakes have experienced unprecedented expansion into the valley north of the West Twin.  The Town of Warren has declared a State of Emergency two years in a row in order to obtain funding to keep roads above the water, increasing road height by 5 feet in several sections with temporary patches.

Despite mounting evidence that conclusively links the long term water level trend to the WWTP wastewater discharge, the DNR continues to push the Village to move ahead with CLEARAS.  Doing so does nothing to address the environmental damage being caused by the volume of water being discharged.  The DNR has published numerous statements over the years citing concern for the effect that the WWTP has on lake levels.  Despite calls for additional detailed study and constant monitoring of lake levels no tangible action has been taken, even after a 2008 analysis concluded that water seepage from Twin Lakes was lower than expected.

In 2009, the USGS published a detailed groundwater study of Polk, St. Croix, and Pierce counties, which included a fairly detailed study of Twin Lakes hydrology.  When a data model is constructed using the formulas from the study with historical rainfall, evaporation, and WWTP discharge data, the results precisely match observed lake elevations over a 42 year period. The calculated rising water trend also precisely matches findings published by the DNR in 1995.

The treatment plant’s 5 year DNR WPDES (Wisconsin Pollution Discharge Elimination System) permit expired at the end of 2016.  During the renewal process, Town of Warren residents petitioned the DNR for a public hearing, which delayed the permit process until mid November of 2017.  The DNR dismissed the water level complaints, citing that it does not have the authority to regulate water quantity, only quality. Residents responded by petitioning the DNR for an adjudication hearing before a judge, which was promptly denied by the DNR because the 308 page document was delivered to Madison by FedEx rather than Certified Mail.  The Village’s WPDES Permit was subsequently reissued, and included new requirements for monitoring water volumes discharged into the lakes.  The Village of Roberts is contesting the new requirements on the grounds that they are not necessary, and the DNR has suspended them pending a Contested Case Hearing petitioned by the Village. 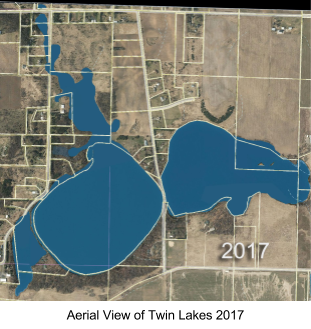 Despite the significant timeline setbacks, the DNR is insisting on the same aggressive compliance schedule for the Village to meet its tightened requirements.  This is a strong indicator that the DNR wants the Village to move ahead with CLEARAS at all costs, before the intensifying lake level issues become significant legal problems for the Village, which appears to be inevitable.  Once Roberts is forced to acknowledge the detrimental effects of its treatment plant on the environment and area residents, it will have to rethink its strategy for handling wastewater discharge, which would endanger the CLEARAS initiative.

The urgency on the compliance timeline set by the DNR is certainly not about the water quality in Twin Lakes.  The Roberts WWTP is already discharging water into the lakes that is much cleaner than the existing water in the lakes.  The plant does an exemplary job of treating the wastewater, and goes beyond the requirements in its current WPDES permit.

Forcing the Village to further reduce phosphorus levels on such an accelerated time frame does not serve the interests of the lakes, or the residents of Roberts / Warren.  It only serves the interests of the State DNR and its haste to get a landmark CLEARAS implementation running on a largely insignificant pair of lakes.  It is very apparent that the DNR has very little regard for the actual Twin Lakes environment, or the people that live in that environment.  Any options that Roberts has in dealing with managing lake levels will be much more difficult to attain once the DNR successfully railroads the Village into implementing CLEARAS.  Time is running out for the residents of Roberts / Warren.